One of the most common butterflies we see around Marin is the Cabbage White; and it has the distinction of being the only naturalized exotic butterfly in our area. This species has successfully established itself over the entire continent since its apparent introduction from Europe into southeastern Canada in the mid 1800’s.  Most likely it was imported as larvae, hidden within the leaves of a cabbage plant. People called them ‘cabbage worms’, and since they fed on food crops, they were considered pests. 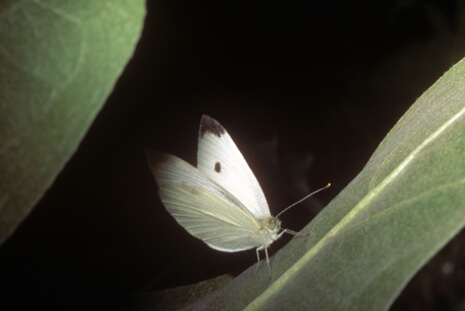 Within the same family (Pieridae) as the Cabbage White, are several native species of white and   yellow butterflies, most of which are not commonly seen in Marin gardens. Many of the native ‘whites’ are closely associated with specific plant communities; such as the Pine White, found in pine forests; the Spring White which is characteristic of barren serpentine soils; and the Checkered White which often associates with coastal grasslands.

One native species, the Mustard White (Pieris ‘napi’ complex) is fairly common in Bay Area forests, and looks similar to the very common Cabbage White. The Mustard White has crisp dark vein lines on the underside of the hind wing; not always so distinct in later summer broods; but the Cabbage White never has black veins. The larval host plants of the Mustard White are mostly weedy or wild plants in the mustard family.  Native host plants include Common Milkmaids (Cardamine (Dentaria) californica var. californica) a perennial wildflower which grows in my oak woodlands. So, very occasionally, I feel lucky to see this butterfly in the woodlands, but I never see it at any of my garden plants. 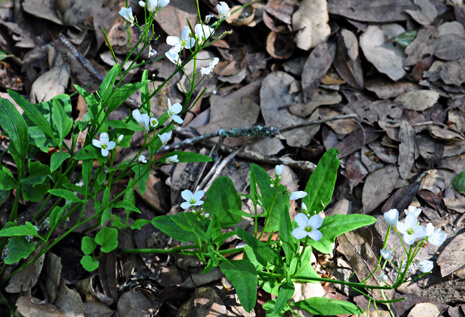 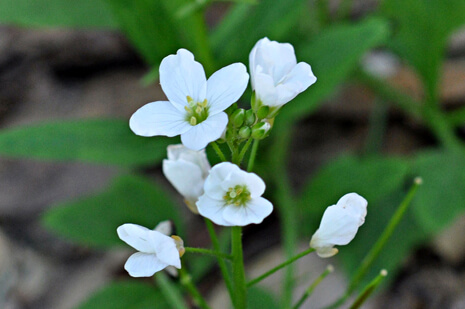 the delicate, fragrant flowers of the Common Milkmaids

Not so with the most common of the yellow butterflies, the Orange Sulfur, or Alfalfa Butterfly (Colias eurytheme); I see this butterfly nectaring at all sorts of flowers in my garden. But that’s because of the meadow that’s right next to the garden, and all the vetches that grow there! This butterfly associates with plants of the Pea family (Fabaceae), both native and introduced species of open meadows, disturbed fields, and grasslands. The larvae feed on vetches, clovers and sweet clovers (Melilotus spp.) locoweeds, and some species of lotus. I grow Deerweed (Lotus scoparius), which is one of the host plants of the Orange Sulfur. It’s a small shrub with tiny leaves and small yellow flowers; and not the least bit showy. I grow it in the wilder parts of my garden; it is very drought tolerant, but half the year it just looks like a bunch of twiggy stems. 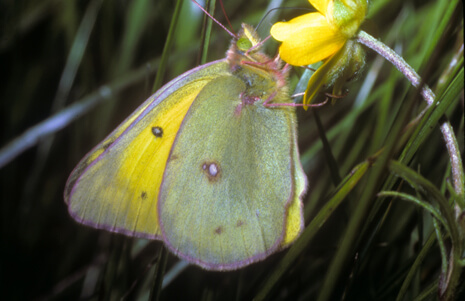 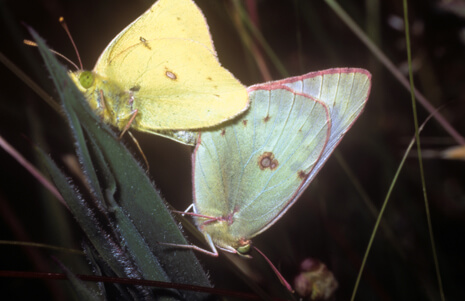 One of the yellow butterflies in the Pieridae family is the California Dogface (Zerene eurydice) which is the state butterfly. The male has the distinctive poodle-head shaped pattern on the top side of the front wings, which are broadly edged in black; the female is all yellow with a small black dot on the top of the front wings. The back under wing of the female has a beautiful pale greenish caste to it. 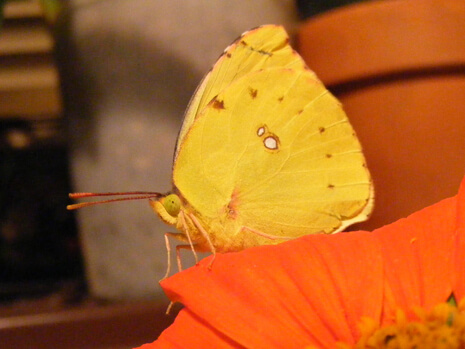 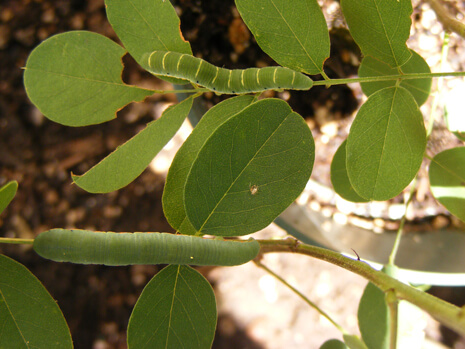 This butterfly is now quite uncommon in the Bay Area, as is the only larval host plant it uses; False Indigo (Amorpha californica var. napensis) which is a pea family shrub. I’ve seen this shrub growing along some trails on Mt. Burdell and Mt. Tamalpais. It’s a difficult plant to find at the nurseries, and it sometimes takes a long time to establish in the garden.

This small white butterfly flies all year long, and is common in gardens, particularly where vegetables are also being grown! The larvae feed on all the familiar cabbage-mustard family (Brassicaceae or Cruciferae) plants; and also weedy cabbage family members such as wild radish and a wide variety of wild mustards. Some ‘wild mustards’ are native and showy, like Coast Rock Cress (Arabis blepharophylla); others are introduced weedy plants like the pepperweeds (Lepidium spp.). Some Brassicaceae family members; Moneywort (Lunaria spp.), and the Wallflowers  (Cheiranthus and Erysimum spp.) are never used as a host plant. Probably these plants are lacking in the sulfur compounds and essential oils that offer some protection to this species. 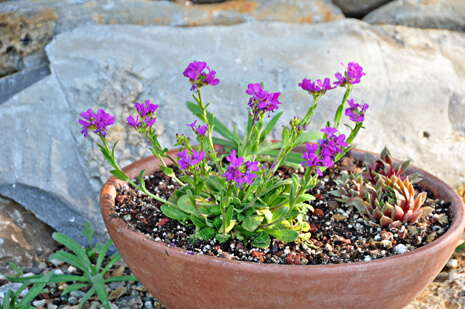 One plant that does have the right chemical composition to serve as a host plant is ordinary garden Nasturiums (Tropaeolum), which is not at all related to cabbages or mustards.  I find this extraordinary! The two organisms don’t even come from the same continents originally (nasturiums are native to cool mountain areas in Central and South America), and yet, here’s an introduced species of butterfly, an immigrant that has made itself at home in a whole new continent; and it finds another introduced species that can provide for their larvae. That’s because the chemical composition of Nasturiums is similar to that of some members of the cabbage family. Butterflies are great botanists! 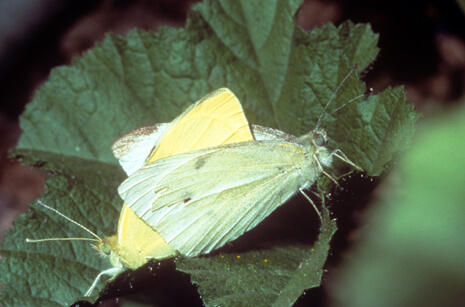 The Cabbage White has several broods each years; and individuals from early broods can look somewhat different than those from later broods; both in size and markings. They are also not always really white; males, especially, can be more yellowish in color. One can see the difference between males and females in this butterfly; females have two dark spots on the top front wings; males have just one dark spot on the top front wing. I remember it this way: female is two syllables = two spots; male is one syllable = one spot.

The larva of this species is green, and often hard to find on the plant. The larva has a pattern of faint yellow dashes along both sides of its body, and looks really similar to the larva of the Mustard White. But Mustard Whites are found in more natural habitats, while Cabbage Whites are almost always found in a garden or weedy field. Vegetable gardeners can plant a ‘decoy ‘ patch of Nasturiums, or weedy mustards for the larvae. The pupae of these species are usually green, and are attached at two points; by the cremaster into a silk button, and by a silken ‘girdle’ about midway along the body.