The Painted Lady (Vanessa cardui) is the most cosmopolitan of all butterflies on earth. This butterfly is widely distributed all over the Northern hemisphere, and can be seen in all types of habitats except dense forests. Painted Ladies lay their eggs on many different plants, and their larvae feed on a wider variety of plants (polyphagus) than most other butterfly species. Even though they are often thought of as the ‘Thistle Butterfly’, and a majority of their eggs are laid on thistles, the larvae feed, and can be reared, on a huge and varied number of plants, and plant types, in several different families. 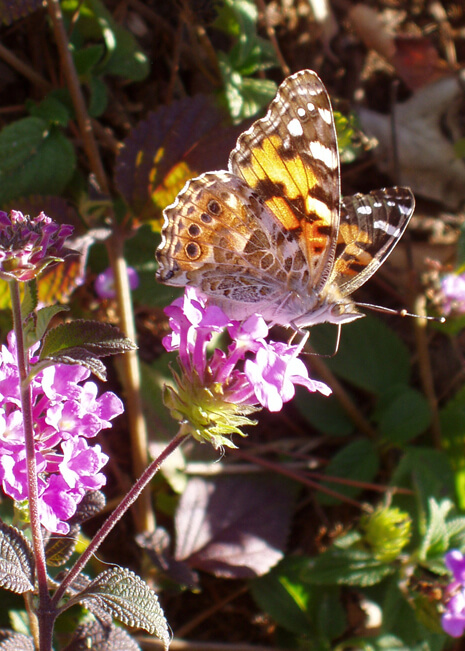 Here in California, populations of Painted Ladies overwinter in the deserts along the Mexican border, where they breed and lay their eggs on annual plants that grow quickly after the winter rains start. The adults then move northward in a migration that varies greatly from year to year; in heavy rainfall years hundreds of millions of adults fly from southeast to northwest through California. The last great migration year was 2005, when an estimated one billion individual Painted Ladies migrated north. These butterflies emerge from the pupa with a yellow fat reserve that allows them to fly from dawn to dusk without stopping to feed. As their fat reserve dwindles they stop migrating, begin to feed, and become sexually active. A reverse, but much more casual migration, occurs in late summer, when the butterflies head south again, feeding and breeding along the way.

I often find Painted Lady larvae in spring or early summer on Italian Thistle (Carduus pycnocephalus) and, therefore, keep a controlled patch of this annual weed growing on my property. This thistle is a great habitat plant; and even before I see the Painted Lady larvae, I find aphids, ants, and aphid mummies, Ladybird Beetles, both larvae and adults, Soldier Beetles, and spiders, and also the larvae of the Mylitta Crescent on this thistle. Butterflies, bees and hummingbirds come to the flowers for nectar, and a little later on, when the flowers have gone to seed, Goldfinches use the ‘thistle-down’ to line their nests, and feed on the thistle seed. Goldfinches are one of the few songbirds that feed their nestlings mostly seeds; most other songbirds rear their young primarily on insects. 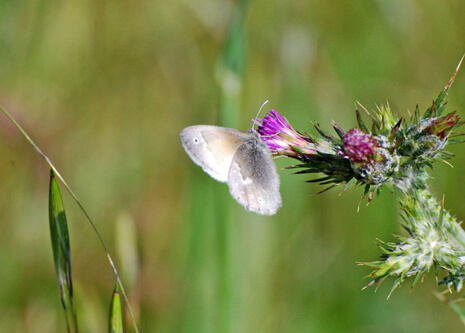 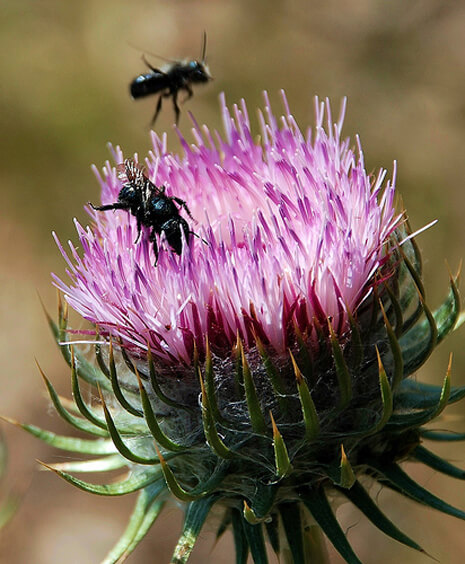 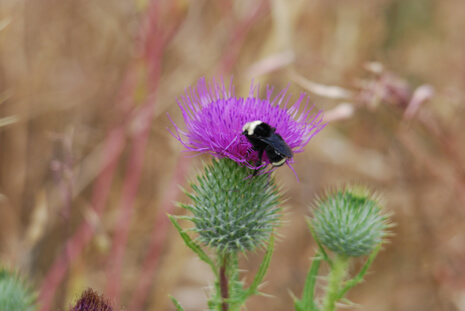 Butterflies belonging to one of the largest families of butterflies, the Nymphalidae, (which is comprised of many subfamilies), are often called ‘brushfoots’.  We all know that insects have six legs; but these butterflies get around on just four functional legs! That’s because the front pair is greatly reduced, and ‘brushlike’; this set of legs is held close to the body, kind of under the ‘chin’ of the butterfly.  In the female the brushfoot has evolved as a sensory organ; the female ‘drums’ the foot against a plant to take a chemical reading; this helps her determine if the plant is a suitable host on which to lay her eggs. The ‘brushfoot’ does not have any known function in the male butterfly. 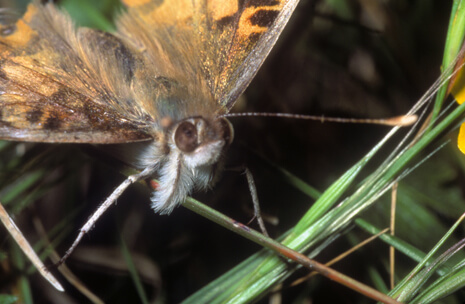 The larvae of all the ‘Ladies’ have hairs and little tufts of spines on their bodies; these are thought to offer some protection against parasatoids. Each species has distinctive colors in bands, stripes and spots, which help to camouflage the caterpillar, but despite these protections, they all make nests on the host plant to live in. The Painted Lady caterpillar is usually black, with yellowish lines on each side, and a black head; it makes a nest by rolling the edges of a leaf together and securing it with silk. A new nest is made after each molt. The nests are easy to spot on the host plant; they are often messy and filled with the caterpillar’s droppings (which are called frass). The early instar larva spends most of the day concealed,  feeding in and around the nest; later instar larva often wander out to feed at dawn and dusk. 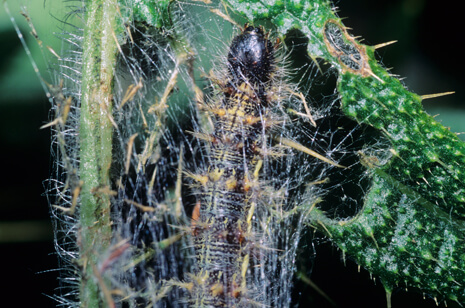 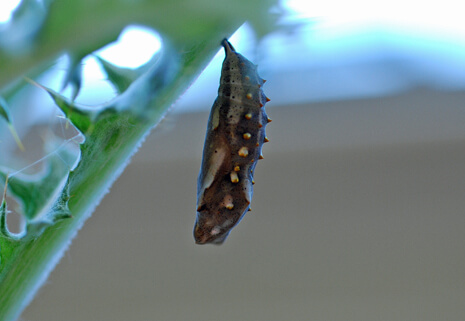 The pupa is grayish with some iridescent markings, attached at a single point, and, in all the Nymphalidae, hangs vertically, with the head down. The pupa can often be found on, or close to, the host plant.

Learn more about the wide range of host plants »