An Ode to Elderberries 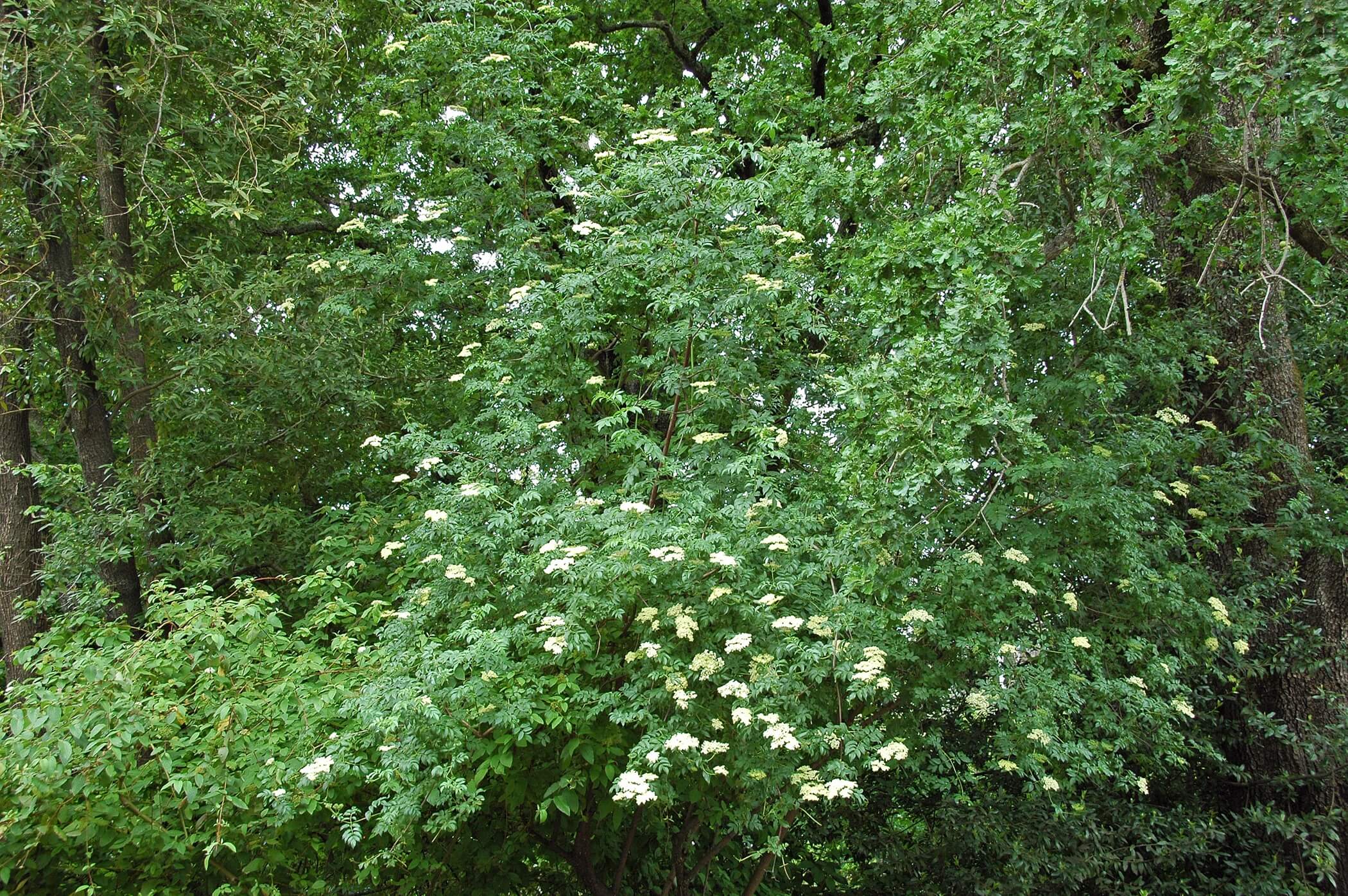 Elderberries and Other Native Fruits of Summer

California native plants provided a rich and varied diet for the native peoples; this is a flora of plentitude, and I really like to partake of it. I recently picked and cleaned the fruits of Lemonade Berry (Rhus integrifolia) and in removing the flesh from seed within, discovered that, true to its common name, these fruits make a wonderful pink, Indian lemonade!

Every summer I pick large quantities of Blue Elderberries; I have several shrubs in my own garden, and also have access to established shrubs in the gardens of several friends. Blue Elderberry (Sambucus nigra ssp.caerulea) is edible and full of healthy nutrients, with a long history of human uses both in Europe and North America. The raw berries should not be eaten in quantity because they can cause stomach upset. Other parts of the plants; roots, bark and leaves, are poisonous, and should not be eaten, though when prepared, and taken in small doses, they have been used as an emetic.

Blue Elderberries need to be cooked before they can be safely eaten in any quantity. The berries contain active alkaloids; hydrocyanic acid and sambucine, which can cause stomach upset; cooking the berries negates the effect of these alkaloids. The alkaloids are concentrated in the seeds within the berries in both species, but with higher concentrations in the Red Elderberry. The berries are a good source of calcium, phosphorous, and iron, and are very high in Vitamin C.

The Red Elderberry (Sambucus racemosa) attracts a lot of birds which eat the berries. The flowers are held in a domed panicle, not a flat one like in the Blue Elderberry, and obviously the berries are red! Humans have used these berries too, but with much more care taken to be sure all the seeds are removed as part of the processing. The flesh of the berries, once all the seeds have been removed, can be made into a ‘fruit leather’

Blue Elderberry grows naturally in a number of different habitats; from riparian zones to mixed broadleaf forests to dry oak woodlands. They can be large shrubs, sometimes reaching 25 ft; the Red Elderberry tends to be a smaller shrub, reaching about 10 to 13 feet. Red Elderberry grows in the cooler coastal zones here in Marin, and its range extends all the way up the Pacific Coast to the Canada.

Different species of Elderberries grow all over Europe, Australia, Asia, and both north and south America. They have recently been reclassified; removed from the Honeysuckle family (Caprifoliaceae) and grouped with Viburnums in the Adoxaceae family. The genera name (Sambucus) is thought to have come from the Latin ‘Sambuca’ which is a stringed instrument – and sure enough – California’s native peoples made flutes and clapper sticks from long straight ‘water sprouts’. The species name (nigra) refers to the black berries; the variety name (caerulea) is from the Latin ‘cerule’ which means blue; and what we have is a blue-black berry when the  white glaucus powder is rubbed off.

Long straight stems have a very pithy core; this was removed to make instruments; but not discarded, because it made perfect tinder material when dried. Young soft shoots were cut for fire drills; and it is thought that this is where the common name came from. The Anglo-Saxon name for a fire-kindler was ‘ellen’; which morphed into ‘elder’.  From the European Middle Ages on the Elder tree has been considered a holy tree; capable of restoring and keeping good health!

Blue Elderberry used to be very common in the huge riparian zones along the rivers in California’s great central valley. Only ten percent of those riparian forests remain in tact, and because of the loss of this habitat the Valley Elderberry Longhorn Beetle was listed as endangered in 1980. (Family: Cerambycidae, Species: Desmocerus californicus dimorphis)

The adult beetle lays her eggs on the bark, and the larvae of this large and spectacularly colored long-horned beetle then bore into the branches of Sambucus species; while the adults feed on pollen, flower parts, and foliage. The Elderberry flowers also attract lots of other beneficial insects, and the berries are a magnet for all sorts of songbirds in the late summer. Deer also appreciate this plant, browsing on the foliage in spring, and again in late summer, just before the plant goes dormant.

Modern agricultural methods typically destroy habitat; older methods always allowed room for hedgerows full of native plants between cultivated fields. These mixed plantings provide habitat for insects, birds and other small creatures; all of which helped keep a natural balance between plant pests and their predators.

Elderberry is easy in garden culture, adapting to different soils and light conditions. The plant appreciates a top-dressing of compost and/or mulch, and thrives with extra water; but mine grow nicely in the sunspots between oaks, and once established, get only rainwater. If exposed to the deer, be sure to protect the plant until it grows out of their reach. Severe pruning, or coppicing, keeps the plant a manageable size, and during a good rain year, also increases the fruit set.

Sometimes in spring I will pick some of the flowering umbels; though I actually don’t really like to sacrifice the ensuing berries. The flowers make a lovely, delicate tea or cold drink. The larger stems need to be removed, and the umbels should be cleaned a bit to remove any dried-out bits; then boiling water is simply poured over them and the concoction allowed to steep. This can also be made like a ‘sun-tea’; with water and flowers allowed to steep in the hot sun. When you notice a nice golden color, strain off the liquid and, if desired, add some sweetening.

The flower umbels can also be used to make flower fritters; leave the main stem in tact, but clean out any dried bits, and make sure there are no insects loitering amongst the flowers! Make a very light pancake-type batter, dip the umbel in the batter and fry in a light oil; add sweetener if desired.

When I pick Elderberries I leave all the ones high on the shrub for the birds, and pick only those within easy reach. I’ll often set aside a small quantity of berries to clean, without cooking, to get some seeds. The flesh of any fruit is an inhibiting factor to germination of the seed contained within; this has to be removed to propagate the plant from seed. One of my Elderberries grows close to a stone wall, so sometimes I just collect the seeds that accumulate there; all neatly cleaned up by the birds that ate the berries!

If the berry contains seeds, there will be between one and four in each small fruit, and the seeds are also are small (1 to 2 mm. long). Not all the berries contain a seed, and starting from seeds isn’t the easiest way to propagate this plant; my notes show that germination can take three months, or longer, and then it’s another two months or so before a strong root system has developed. Old, cleaned and stored seed (viable to about 15 years) seem to germinate a bit more quickly. And, when I’ve processed the berries for a food product, I always put the leavings (which invariably contain some seeds) onto one of my compost or brush piles; and guess what sometimes grows!

To grow the plant from cuttings I keep a watch on the new buds; and when they are just beginning to swell and lengthen into a new twig, usually about March, I take ‘mallet’ cuttings. There are usually two buds, growing exactly opposite each other on the year-old stem; make a cutting that leaves about one-half inch of the year-old wood on both sides of the newly lengthening twig. Then select the strongest of the two twigs, remove one, and scar the node tissue a bit. Dip the cuttings in a rooting hormone, and place in a soil-less cutting medium; roots will develop in about six weeks, and a good sized plant within another three to four months. (Refer to the propagation section for more details.)

The berries can be cooked when fresh, and then many tasty concoctions can be made from them. Handling each umbel in turn, with either a fork or a small pair of scissors, I simply separate the berries from the main stem and most of the small stems. To make a healthy tonic, or juice to make a jelly, I add water to cover all the berries and bring it just to a low rolling boil for ten minutes or so. I’ll mash the berries a bit to release more of the juice within, let it sit for several hours, and then repeat the process about three times.  The juice needs to be strained from what remains of the small stems and berries; and then one can make a really nice jelly, a pancake syrup, an Elderberry tonic, or even meade, or liqueur.

The cleaned berries can also be dried in a 200 degree oven (native peoples dried them in the sun) and stored to be used for tea later on. I’ve found a non-stick aluminum foil works best for this process.

To make a healthy and tasty tonic I add some sweetener, either honey or cane sugar, and also a bit of lemon and/or lime juice to taste. I’ve also sweetened the tonic with Stevia, but I prefer to use the green leaf, rather that the powdered concentrate (which leaves a peculiar aftertaste). Stevia rebaudiana is an easy plant to grow in a container, and small stem tips with leaves attached add just a bit of sweetness when steeped with any herbal tea. For the tonic I cook the leafy stems of Stevia with the juice until it comes to a desired sweetness. The tonic is then bottled and shared with my students, friends, and family.

To make a jelly; I cook a portion of the berries with apples, which increases the pectin, and improves the set. Gravenstein apples are usually ripe at the same time as the berries; use three or four, cut them up with the peel, core and seeds in tact, cover with water, and cook these together with the berries. Then strain off the liquid, and follow your favorite jelly recipe. I add lemon-lime juice to taste, a minimum amount of sugar; and then use a low-sugar pectin to get the jelly to set.

To make a syrup; I use the prepared juice from the berries, add lemon/lime juice and honey to taste, and then a bit of organic corn starch to thicken the juice into a syrup.

A Flora of Plentitude

California flora is rich with plants that produce edible fruits; mostly berries, drupes and pomes. Elderberry is just one of more than a hundred plants  that the native peoples relied on, and often with multiple uses for each plant species. At the same time that elderberries are ripening, I’m also collecting berries from our native currant (Ribes sanguineum var. glutinosum), and native cherries (Prunus ilicifolia and P. ilicifolia ssp. lyonii).

The native peoples also tended and manipulated the growth of many plant species to produce exactly what was needed; coppicing plants to produce long straight ‘epicormic’ shoots for basketry, arrows or instruments. Pruned, coppiced, or burned shrubs also often produced a better, larger crop of fruits on the ensuing new and vigorous growth.

Interestingly, the Coastal Pomo tribe recognized all sorts of connections dependent on the phenology of certain plants. When the Elderberry was blooming they stopped gathering shellfish, fearing the poisonous ‘red tide’; when the Elderberries were ripe, it was safe to gather shellfish again.