The Flickers have now left my oak woodlands and moved to higher elevations in the Coast Ranges; I’ll look forward to seeing them again when we’re camping in the forests this summer. Meanwhile, the Tree Swallows are here already and I’m waiting to hear the first calls of the Ash-throated Flycatchers as they arrive from wintering grounds in Baja California. For the last five or six years they have shown up about the fifth of May, and by June are raising a brood in the nesting box hung in an old Coast Live Oak.

Last year the Flycatchers did not breed here, perhaps due to the drought conditions and reduced insect populations. This year is obviously very different, and I’ve already seen dense clouds of insects floating upwards into the air, massing and dispersing, shifting patterns of light and dark as the tiny creatures come together and then move apart again, much like the famous murmurations displayed by large flocks of Starlings.

What is a Weed – and are they of Value in our Environment?

Now, much of my time in the garden is spent hand-pulling weeds, which seem to grow by several inches each day! I am selective about which weeds I pull and often inspect the plants closely for signs of life. Weeds are not all bad foreign invaders; a number of them support large populations of insects, which in turn support all sorts of other creatures. Many of these non-native weeds are obviously here to stay, so it’s great that they actually benefit a number of native creatures.

Though I pull plenty of Italian thistles (Carduus pycnocephalus), I always leave some controlled patches on our property. When I look closely at a stand of these plants I find aphids and often also ants tending them; soldier beetles, and also ladybird beetles and their larvae. I often find the larvae of two species of butterflies: the Mylitta Crescent (Phyciodes mylitta), and the Painted Lady (Vanessa cardui) feeding on the thistles.

When the thistles are in bloom they attract numerous species of both native bees and honey bees, hover flies, and butterflies which all come for the nectar produced from flowering heads of tightly packed disc flowers. Later still the seeds are eaten by a variety of foraging creatures; Goldfinches are particularly fond of thistle seeds and also use the downy chaff to line their little cupped nests.

For signs of butterfly larvae, I look for damaged leaves and insect frass (excrement) and also for leaf nests. All lepidopteran larvae have the ability to spin silk, and a number of butterfly larvae use their silk to create little hideouts by ‘sewing’ leaves together. They then spend much of the day hidden within their nests and venture out to feed at dusk and dawn. 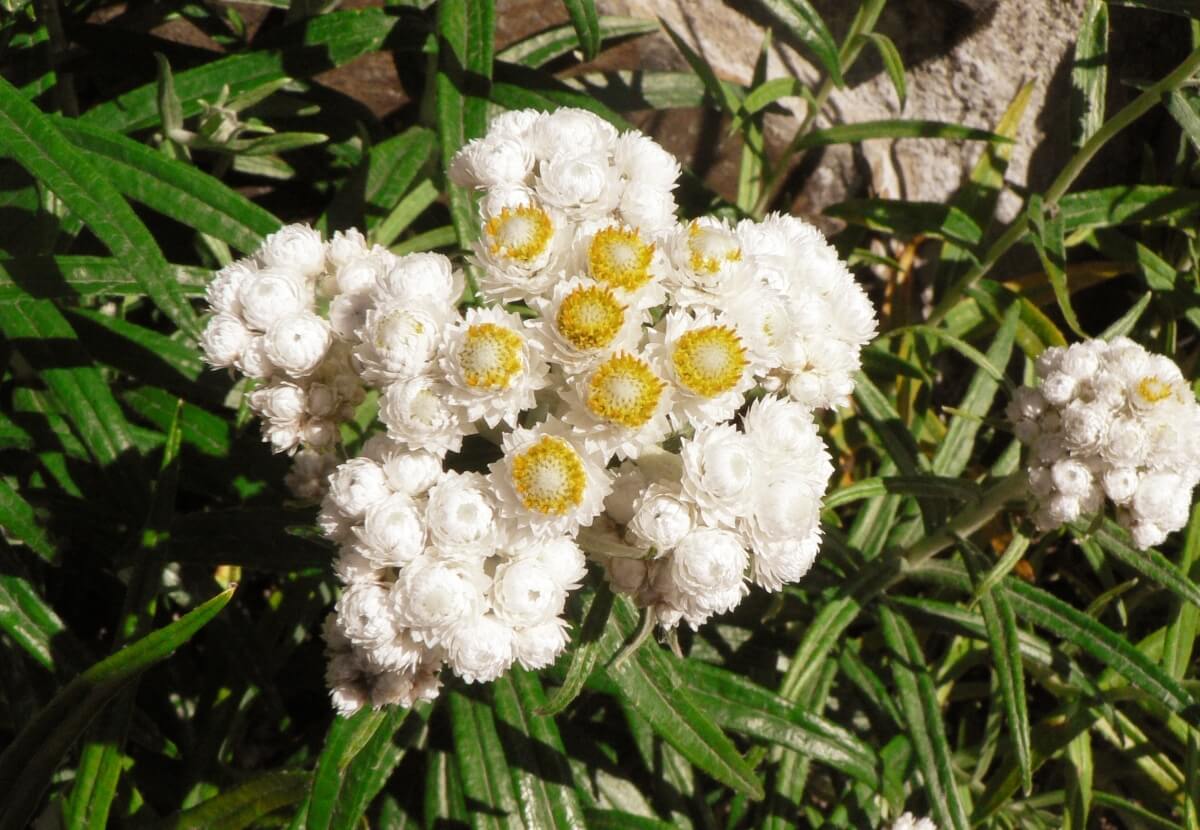 Pearly Everlasting is a host plant for the larvae of American Lady butterflies. Photo: Marc Kummel

I also leave drifts of Cudweeds for the larvae of the American Lady butterfly (Vanessa virginiensis). Though there are several species of native Californian cudweeds (Gnaphaliums), and all are growing on our property, the one that seems to be preferred by the American Lady is an introduced European species (Gnaphalium luteo-album), and even this early in the year I have found several plants with nicely developing larvae.

Pearly Everlasting (Anaphalis margaritaceae) is a California native and also a host plant of the American Lady. It’s a plant that’s been hard to establish in my garden; after wandering around in small patches for years, there is finally a nice cohesive stand in the garden and it is now supporting larvae!

The Red Admiral butterfly (Vanessa atalanta) is yet another insect that finds sustenance from weedy plants; in this case, its often Nettles (Urtica dioica), that are used as a larval host plant. Nettles are a native plant with lots of good qualities, but they are nevertheless despised by many people. Nettles usually grow in moist riparian habitats, and though our property is nowhere close to a stream I see the Red Admirals regularly flying on our hillside.

I have to admit that I purposefully brought Pellitory (Parietaria judaica) -a non-native weedy plant – to my garden in order to provide for the larvae of the Red Admirals. This plant needs year-round moisture, and it does grow rampantly wherever I water by hand, but there’s no danger of it growing in the oak woodlands. And now I have both the adults and the larvae of the beautiful Red Admiral living here in my garden!